You are here: Home / Newsletter / Ride on in 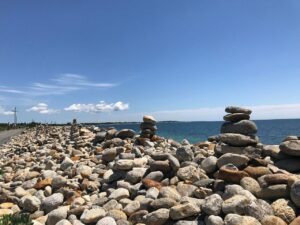 Last week was a glorious departure from the past 10 months of school being in session. In its place was a week full of a few playdates and a whole lot of downtime during which the modus operandi was to get the sun in our faces and to be out of doors. One morning when said son was cranky and lethargic, I strapped our bikes onto the car and set out for one of our favorite haunts when he was born til about when he was three and we moved- The Shining Sea Bike Path.
Being former Teaticket-ers, we most always approached the path at an intersection rather than at the head in N. Falmouth. As I plonked in the coordinates, and drove to our destination I literally broke out into laughter as I saw the TYC flag. (Ah Fortuna!) I love and am humbled by the fact that something relatively in my face for the six years that I lived in Falmouth before we moved and then moved back to the Cape was like a treasure trove opening for the first time.
As we saddled up and began to ride, the cranky 8 year old faded into awe and giggles. It brought tears to my eyes was when K would point out things that he remembered as a toddler nested behind me or in front of his dad as we carted him around as a toddler. ( We did a lot of commuting down to Woods Hole back in the day). It surprised me when he began to whoop and holler as we breezed under the bridges- belly 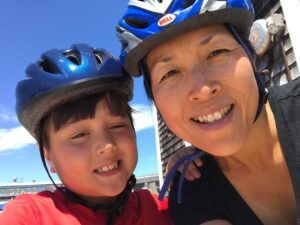 laughs and a good measure of goofiness brushed away the stormy moments early that morning. More so, as my son and I traveled down the path through the marshes, beside the train depot, across the town center and along the stone koans at Stony Beach, I felt in a most profound sense of how important and vital this path is to provide a means of leisure, exercise and transportation. I saw in a new way how amazingly beautiful the varying natural landscapes branching out into pockets of commerce on a people friendly thoroughfare, were.
With that said, we are super stoked to announce that our bike rack was just installed and is ready and waiting for you to enjoy the benefits of fresh air and sunshine, paired with mindful movement and the knowledge that your feet and pedals can create a difference!
(In your mind, body, wallet and planet!)
We wanted to remind you that if you bike, walk, or carpool to class, you are eligible to enter to win a free class for your awesome efforts to protect Mother Earth.
As the tempo of our town’s streets quickens, remember that there is always another way to get from point A to point B.
We look forward to seeing your beautiful and shining faces soon!
xoxo-
Sharon & Your friends at TYC
Wellness Living app