You are here: Home / Newsletter / Come back home with . . .
The Summer Solstice is upon us this coming weekend (along with Father’s Day) and the change and raising levels of activity are palpable as the traffic grows, final games and practices occur, and parties and outdoor gatherings take place. It’s a time of great excitement as well as that which is unknown.
This past weekend was no different as we left the Cape to head up North to attend a birthday party that my son had been waiting weeks for. He had been excited to try an activity that he had always wanted to while also reconnecting with friends. As we walked towards the group, I noticed the slowing of his gait as he began to take in the crowd searching for familiar faces. His body stiffened as he saw bodies climbing and hurtling through the air 20-30 ft above him while the cold realization that he agreed to do this sank in amidst being excited about friends and cake.
Yes, we were at a ropes and zip-line course. 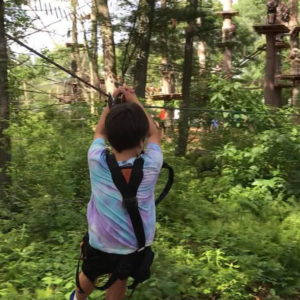 I felt myself taking a big, slow, breath as I saw ‘the look’ rise into his face and the energy in him change while he quickly turned around and started walking back to the car. As I caught up to him, I saw the tears in his eyes and knew that there were a lot of feels going on. Silence. I turned, crouched to his level, and faced the play to see what he was seeing. From his low vantage point I spied a dizzying sea of activity and faces and my heart melted. Change has always been difficult for him. Heck, change is often times difficult for all of us but on this day where the tears were soaking his masked and confused face in an ocean of faces in a new situation? I got it.
Our practice today was equanimity.
I scanned the crowd and found friendly faces we knew and began to speak slowly, lightly, and steadily, as I pointed them out and guided us closer. We connected with our friends and proceeded towards the instruction area. I still felt his resistance but this time it was also paired with the ache of curiosity as harnesses were put on, friend were joking with one another, and straps and carabiners were tightened and played with. Then, the invitation to try out their newly acquired skills on a beginner course came. As he and his friends fumbled with clips and sequence, there were grumbles and shifty feet, but there were also helpers who magically
appeared to offer cues, support, and whoops and hollers as tasks were completed and familiarity was born. The initial fears were dispelled and hours of play complete with moments of shaky bravery and brilliant victories ensued. During our time there I got to witness the arc of learning: the beauty of unknowing, fear, discomfort, curiosity, the thread of information slowly filtered in, practice, familiarity, play, progression, and new-found confidence realized.
It. Was. Awesome. It was yoga and meditation in action.
Yoga and meditation helped me through day one as a beginner and on this day with my son, to walk the unsteady path with a point of focus, breath, and patience. Yoga and meditation are powerful helpers, teachers, and reminders, as they invite us to meet our bodies and minds anew each day as they are and not how we knew they were.
As we walk through this new season in a legacy of learned ways that now seem so new and different, let’s remember to find the thread-our anchor of courage, that helps us to stay steady in discomfort so that we keep open to learning, growing and feeling into our strength. We invite you to your first class or your thousand and first class during these exciting and busy times as a means to let your sands settle, your waters to clear, and come home even as you blaze across new frontiers. We love you and are here for you. We look forward to practicing with you online and outside (in July and August!).
With Love-
Sharon &Your TYC Tribe
Wellness Living app